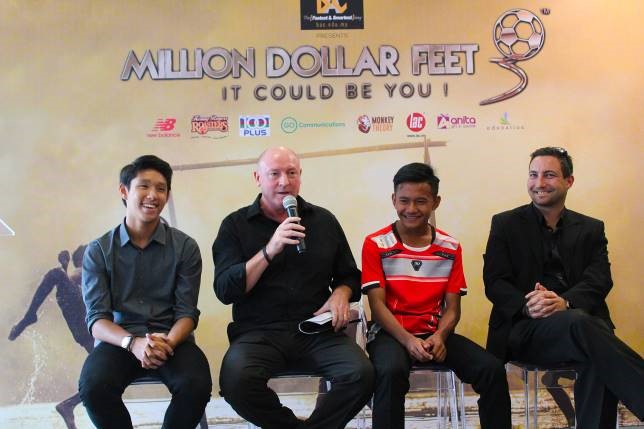 Led by Ex-Liverpool legend & MDF™ Head Coach, Steve McMahon together with MDF™ Founder & Director of Football, Peter de Kretser, the two boys were ceremonially presented with their scholarships by Guest of Honour – H.E. Vicki Treadell, British High Commissioner to Malaysia in an exclusive gathering held at the official residence.

The journey which began with a nationwide search for burgeoning young prodigious footballing talent ultimately climaxed with the selection of two finalists travelling to the UK in the hopes of impressing Europe’s best club scouts and academies within the celebrated Nottingham Forrest training complex. Both Adam Roshan Kris Azman (13 years) and Muhd Yusry Haziq (14), impressed a selection of scouts from top clubs including the likes of Manchester United, Liverpool and Everton in the hope of signing a professional contract.

After months of deliberation and discussion it became clear that Brook House College was the destination of choice for both players, offering the boys a two-year scholarship worth a combined RM1 million and an opportunity to join the academy team while still being able to continue a high level of academic qualifications. Nestled in the heart of Leicestershire, the exclusive Brooke House Football Academy offers world class facilities and training for the best young talents from around the world. Incorporated in 2008 as part of the esteemed Brooke House College, the highly selective academy now has over 70 budding stars aged 12 to 19, who undergo training under the watchful eye of FA qualified coaches.

The Million Dollar Feet™ programme which has been backed by the Ministry of Education and a number of state football associations has delivered on its campaign promise and more.

“Setting the bar at providing young aspiring footballers with an opportunity to impress top clubs was what we wanted to achieve – we couldn’t guarantee a happy ending. Having this fairy-tale finish is a true delight and I’m extremely proud and happy for the lads and their families on what I hope is a life-changing opportunity,” remarked de Kretser, Founder & Director of Football.

Head Coach, Steve McMahon added, “Football is a hotly disputed topic in Malaysia and quite often the lyrics are negative. Today, we have seen that good things can happen in Malaysian football and we plan to continue this momentum moving forward. I’ve seen young footballers from all over the world and these two boys more than deserve this wonderful chance at making the big-time!”

“It’s always a marvellous occasion when we are able to celebrate young talent and with Million Dollar Feet™ I’m thrilled to acknowledge and endorse this terrific opportunity and the symbiotic relationship between young Malaysian footballers and one our greatest British exports, Football! We can only hope that both Adam and Yusry go on to do wonderful things,” said Treadell, British High Commissioner.

Million Dollar Feet™ is set for a dramatic return in 2017 with a variety of new destinations, additional age bracket inclusions, new celebrity coaches and a whole lot more. The programme will launch in June this year and interested participants can always check out our Facebook page at Facebook.com/milliondollarfeet.