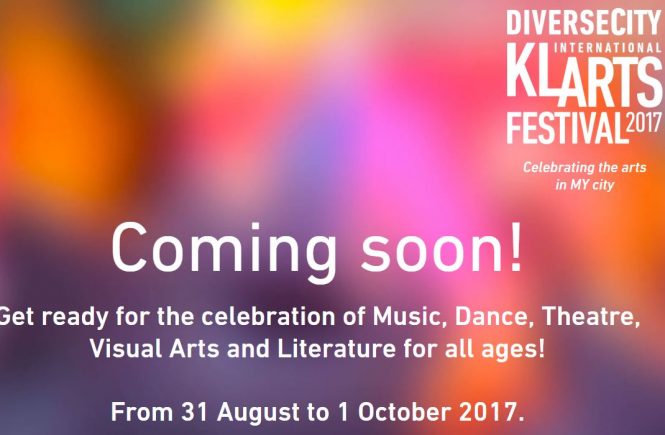 Scheduled to take place throughout September 2017, the DiverseCity’s KL International Arts Festival will showcase acclaimed and up-and-coming artistes from Malaysia and around the world in Kuala Lumpur to celebrate the arts through music, dance, theater, visual arts and literature.

A highlight of the music performances is the open-air ASEAN and DBKL 50th anniversary concert in Panggung Anniversari, Lake Gardens , featuring local and ASEAN artistes who will perform hits across the decades set to new arrangements amidst the lush park setting. Dance enthusiasts can look forward to a 14 all-male Argentinian powerhouse, Che Malambo, whose percussive dance and music spectacle is sure to thrill audiences.

Visitors interested in visual arts will have the privilege of getting up close with one of the key drivers of art development in Malaysia – Yeoh Jin Leng – in a special Retrospective exhibition.

Returning to our shores due to popular demand is playwright Wolfe Bowart who will present Letter’s End this year; while children will certainly enjoy the hilarious and interactive performance entitled Bon Voyage, right on the platform of Keretapi Tanah Melayu Berhad (KTM).

There ​are a host of other exciting performances​ and forums taking place in various venues around Kuala Lumpur including the Auditorium DBKL, Panggung Bandaraya​, Nu Sentral, and the Damansara Performing Arts Center, to name a few, and the Festival will include both ticketed and free events.